skip to main | skip to sidebar

Why I Became a Web Geek

In the late 1940s, in the parts of the world that mattered, the end of WWII and the atomic bomb had brought the philosophical shift we now label post-modernism into the cultural mainstream. But in rural Tennessee, just down the road from the house I grew up in, my grandmother was being loaded onto a wagon to make the 5-mile trip “in to town.” My dad was a breech birth. Home birth had taken a turn for the worse and they needed to get a doctor involved. 40 years later my dad bought about 42 acres of farm land he occasionally plows with a team of mules just for the fun of it. This is just a hobby. He earned his living by dismantling nuclear weapons in the same facility that enriched the uranium for Fat Man and Little Boy.

This is the culture that produced me. About 5 years after I was born, satellite dishes cropped up like kudzu and started piping in the culture of the greater global village. It was amazing to watch the communication/information explosion transform this area.

For example, I found the CBC fascinating. I didn’t understand all the politics involved, but I knew they had a station that broadcast in French because that was the primary language in Quebec and that they had a station out of the North West Territories that featured a lot of content relevant to the First Peoples population there. I didn’t really see that same kind of diversity in American media. We had a lot of forced tolerance, but as we tried to blur lines based on gender and race we drew a greater distinction along class lines. The prevailing message was small towns and small people didn’t matter.

That could be do in part to the overall wealth worship fetish America had in the 80s. Compare Bill Cosby’s Dr. Cliff Huxtable to Fat Albert and the Cosby Kids from the decade before. I could (and still do) identify with the Cosby Kids despite geographic and racial boundaries. The Huxtable kids lived in a different world and that had very little to do with race. The Cosby Kids were a rare example of the not-rich and not-famous among pop culture characters; and closer to my day to day reality than Larry, Darryl and Darryl.

Getting rural areas and poor areas connected to the mass media grid gave these marginalized populations a window to the world. Getting connected to the internet would give us a voice. I wanted to be part of that.

Also, growing up on a “farm” affected my work ethic. I don’t miss manual labor under the blazing Tennessee sun. It was 80 degrees at 8 am today, and it’s not even truly summer yet. I feel most fulfilled if I can point to something at the end of the day and tell myself “I made that. That didn’t exist this morning and now it does.” Luckily I discovered that digital artifacts scratch that psychological itch just as effectively as a freshly planted row of crops. And with significantly less sun burn. If only typing code burned calories as effectively.

On top of that, I’ve been extremely lucky to be in the right place at the right time both educationally and professionally. Everything fell into place and I feel like I’ve found the perfect fit to do what I am.

My dad’s birth story sounds like a scene from a John Ford movie and I earn a living building communication systems out of ASCII characters. That’s a huge jump in just 2 generations. I have 2 kids of my own. I can’t imagine what their adult lives will be like.

Why I Stay Busy

On Friday @kdc retweeted something from @eduguru that sent me to @educheckup where I watched several videos, including the one on Miami-Dade where he mentions one of the few things they did right was pausing the story rotation when you click on a particular number to view a particular story.

Ok. We can fix this. Our front page story rotation is based on the jQuery Cycle plugin from @malsup. Let’s start there.

New version is out as of last month. Might as well update. Should probably update my version of jQuery while I’m at it. We were still running 1.3. Update both scripts, re-minify our local file (plug in collection and custom code), and make sure nothing breaks.

Background color change on pager links to indicate currently active slide no longer works. Fire up FireBug. Eventually figure out activeSlide class is being applied to the li tags rather than the a tags inside the list items. For our implementation, that means the buttons were being flagged as active rather than the actual pager links. Created a custom function for updateActivePagerLink and all was well again.

Pshew! We’re in the clear. Checking the docs for Cycle. Source code reveals some new stuff that hasn't made its way onto the web documentation yet. Luckily Mike does a good job of commenting his code. The functionality I need isn’t built in, but a couple of options get close, such as pause and pauseOnPagerHover. I didn’t have either of those enabled, and pause has been built-in forever. Learning about one usability gotcha lead me to discover another.

At this point the easy, built in stuff is fixed. I turn my attention back to the initial issue. Following the conventions set up by 2 existing options within the plugin (pauseOnPagerHover and onPagerEvent) I create a new option called pauseOnPagerEvent and insert 2 new lines of code: an if statement to check the state of the new option and code lifted from pauseOnPagerHover to actually trigger the pause. Amazingly, this works on the first try.

I’m still not happy with that solution because I think a more elegant way to do it would involve onPagerEvent. I just spent another hour trying to figure out how to write my own function for that callback and failed yet again. 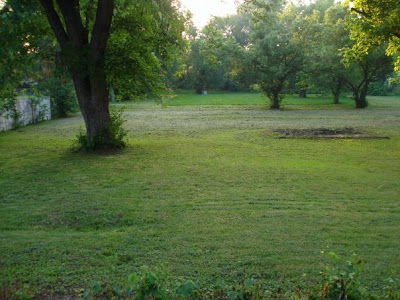 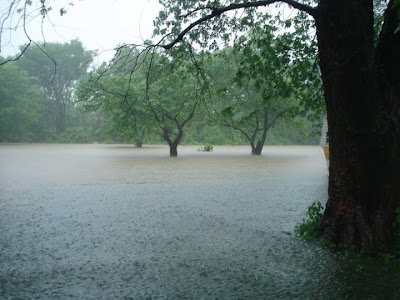 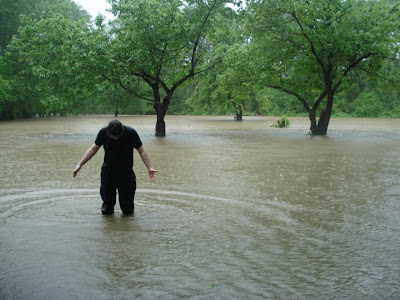 The first photo here is me mowing our lawn a couple of summers ago. I'm a tiny little dot way back there, but you can see me if you squint. Take note of the big maple tree in the left of that image, the square of concrete to the right, and the row of 2 chestnut trees further back from that.

The 2nd photo is taken from right next to the big maple tree. The 3rd photo was taken from the concrete pad. Norma was ankle deep taking that photo, even with 5 inches of concrete between her and the ground. I'm standing about 3 paces beyond the edge of the concrete. You can see how deep it is out there.

The water has actually receded since we took those photos, about a foot by depth, several yards by horizontal progress. The concrete is no longer covered, for example. But there's another storm coming and the big one that dumped all that on top of us is technically still in the watershed the feeds into the lake near here. I'm hoping the worst is past us but I'm not going to count on that.