skip to main | skip to sidebar

This was one of those projects that I thought would take half a day and ended up taking a week. If I’m going to sink that much work into it, I might as well share what I’ve learned.

I started out looking for lists of higher ed blogs. I didn’t realize at the time that I’d be documenting the process so I didn’t save the lists I ended up using. Those playing along at home can Google it. Once I found my lists, I looked for blogs that lived on a .edu top level domain. Then I looked for any links that mentioned usage guidelines or policies, went to the home page and performed site searches, played around with the wording, and whatever else I could come up with to locate the sort of info I was hunting for. Sometimes the leads I found would be walled up inside an intranet, which is understandable if not a little disappointing. I ended up with around a dozen promising leads.

From those links, I collected about 60 phrases from 7 different schools (in no particular order).

I grouped those phrases under common themes and came up with these 9 common elements.

Not every school covered all those points. Not surprisingly, Harvard Law has one of the most thorough documents and they’ve been nice enough to license their terms under a Creative Commons Attribution-Share Alike 3.0 United States License. If you need to put together some guidelines in a hurry I recommend starting there and adjusting the wording to meet the needs of your particular institution.

Performance: Where Do We Draw the Line?

I endorse the majority of the content of the following presentation:

The Top 5 Mistakes of Massive CSS

It’s not even so much that I disagree with what she’s saying up there. I just apparently have a slightly different comfort level than she does when it comes to altering my work flow for the sake of performance gains. The only point I really have exceptions to is the idea of avoiding IDs in CSS.

I think IDs make perfect sense for major page areas like #footer or for elements that are truly unique like #logo. But I’m not gonna throw the baby out with the bathwater. She’s right that there are trade offs in using IDs and we should be aware of them so that we can make informed decisions.

It only took me 159 lines of CSS to find a use of an ID that makes me question the sanity of my former self. Applying a class to objects using the same design pattern would be more elegant in that situation. I probably have a dozen or so more of those I can clean up when I find the time (HA!).

The primary case study in the above presentation is Facebook. Here’s some CSS from Facebook. I see around 20 instances of IDs used in selectors; stuff like #content and #pageFooter. Even her primary example doesn’s practice what she’s preaching with full on zealotry.

We are quick to forget that presentations like this are designed for oral communication. Nicole wants the people in that room with her to leave the conference with a few big ideas stuck in their minds. But it gets recorded and published as a video. That changes the medium. The medium is the message. So the audience expectations change. We non-attendees fault the speaker for presenting things in absolute terms. We expect video content to at least pay lip service to the fairness doctrine. But that’s really not fair.

Nicole doesn’t spend a lot of time on this, but she mentions it in passing, so I’ll take a moment to get up on this particular soap box. My biggest problem with stuff like object oriented CSS and YUI Grids is presentational class names. That clashes with philosophies like the separation of content, style, and behavior or progressive enhancement that I’m not willing to sacrifice. And not just because Zeldman told me so.

I honestly believe these ideals bring value to the work I do above and beyond simple efficiency. That probably has something to do with the fact that I work in-house. The few client based projects I’ve done over the years tend to get junked up with presentational markup a couple hours after the client takes over anyway. If that was the only sort of work I ever did, I’d probably be in love with Blueprint. I can see the value of such frameworks for quickly producing a high fidelity prototype. But just like a mechanical engineer wouldn’t put a part produced by a 3-D printer into a final product, I wouldn’t put a CSS framework into production.

So far today I’ve read two really good articles dealing with web analytics: Metrics and Dimensions and Reports — Oh My! from the Omniture blog and The Complete Beginner’s Guide to Web Analytics and Measurement from UX Booth.

But seeing these two articles open in adjacent tabs lead me to do some side by side comparisons. I noticed my gut reaction the the Omniture blog was “I don’t want to read all that!” The UX Booth article was considerably longer, but it didn’t illicit such a knee jerk reaction. I think the reason for this is white space. UX Booth gives their content a bit more room to breath.

The following screen shots show the first 910-ish characters of content. I attempted to preserve the white space between this content and off screen elements. I’m using PNG-8 to avoid jpg compression making the text fuzzy. The downside is the photo from Oniture ends up looking a bit off. My fault, not theirs. Also, Blogger appears to be scaling these images to be the same width. The Omniture Blog screen shot is actually about 20px wider, for what that’s worth. 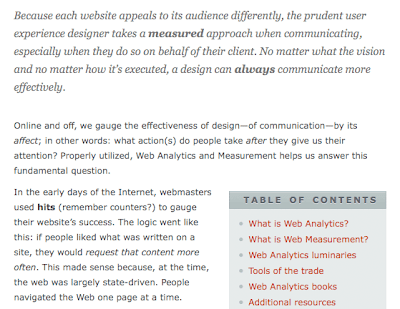 The textual content here are within 5 characters of each other, 912 characters for Omniture vs. 907 characters for UX Booth. Both spend some screen real estate on supplementary content, a photo or a table of contents. But I find the UX Booth content much more inviting. And by my count they use about a third more pixels to present their content.

What Do You Think?